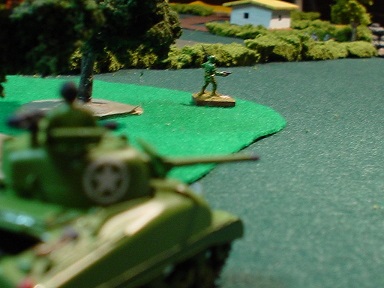 The Fury is a Custom Squad Leader Scenario based on the movie of the same name.

Description: With only days left in the war, a Unit of American Sherman Tanks must stop a column of SS Troops at a small Crossroads village in Western Germany. In order to get there they must pass through enemy territory with reports of known Tiger Tank activity in the area.

Phase I – Tank Battle
The Game begins with the Allies en route to the Crossroads where they must pass through territory controlled by a German Tiger Tank. The surviving Allied Tanks from Phase 1 will be used for Phase II.

Phase II – The Crossroads
The Surviving Tanks from Phase I will be used for Phase II. The Allies win Phase II if they control the Crossroads Hexes XX at the End of Turn XX.

Back to Wargaming Home